Every day, Global Rescue personnel are involved in medical, security, and travel operations all over the globe. Here is a snapshot of some of our recent activity. 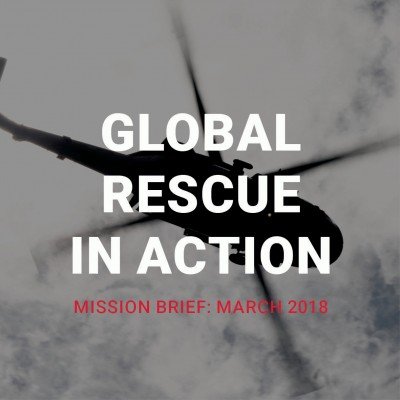 ALASKA – Facilitated the search and rescue of a member who fell through the ice near Arctic Village.

INDONESIA – Evacuated a member who sustained two broken legs while climbing Carstensz Pyramid in the remote jungle of Papua and deployed personnel to his bedside to escort him home.

PAKISTAN – Performed a helicopter evacuation when a member suffered severe symptoms of altitude sickness while climbing in Shimshal.

ARGENTINA – Evacuated a member who was blinded by snow on Mount Aconcagua and was unable to continue.

MEXICO – Arranged for a member to have a prescription refilled while traveling in Cabo San Lucas.

GERMANY – Provided medical advisory services for a member who sustained head and arm injuries after suffering a fall while getting out of a taxi in Berlin while traveling on business.

COSTA RICA – Advised a member who was stung by a scorpion.

THAILAND – Recommended treatment and evaluated local medical care for a member who suffered a hand laceration in Bangkok.

ALASKA – Recommended treatment and an appropriate local medical facility for a member who injured his knee while heliskiing.

CANADA – Performed a medical evacuation for a member who suffered a traumatic hip injury in British Columbia while skiing.

GRENADA – Provided medical advisory services for a member with an ear infection.

NIGERIA – Performed a medical evacuation on behalf of a client with a traveling employee who suffered a ruptured appendix.

BRAZIL – Advised a member who was concerned about a military coup while traveling in Rio.

BARCELONA – Provided guidance to a school with a student detained by police.

TURKEY – Provided advice regarding an individual who was attacked and robbed in Istanbul.

HAWAII – Advised a member regarding the false warning of an inbound ballistic missile targeting Hawaii.

MULTIPLE LOCATIONS – Provided assessments of the security and medical risks to clients and members in multiple locations including Mexico and Morocco.

Interested in learning more about hunting duck, dove, pigeon and perdiz in Argentina? Questions about dorado fishing, lodging or other key details of your upcoming trip? Call Champion Hunting today at 361-877-6622 and one of our experts will be happy to help.